We just keep getting bad economic #s - like the ISM #s today.  This is in addition to all the issues I mentioned over the weekend.  The MSM though is spending most of their time talking about the "deal" in DC.  Assuming the deal becomes a "done deal" it will be forgotten by the end of the week, but the economic #s just keep on giving.  Hehehe

Today started like a house on fire.  Somebody forgot to call the fire department and an hour later the house was ashes (after the ISM #s).  Of course, this was consistent with what the cycles were predicting.  By the end of the day the market recovered substantially.  I would like to point out even though we closed in the red the VIX was down over 6%.  Given the strength of the recovery the VIX may be telling us that today was the bottom?  It had that feeling.  So I think there is a good chance (close to 50%) that the cycles bottomed today.  If not the bottom should happen in the morning and the shorter cycles except the 22TD cycle will be up by the end of the day (the 22TD cycle tops and turns down).  Watch the pre-market and decide if you want to risk a long trade tomorrow.

I believe there may be indecisive action early and by the end of the day we should rally some and have an up day.  Here is a visual: 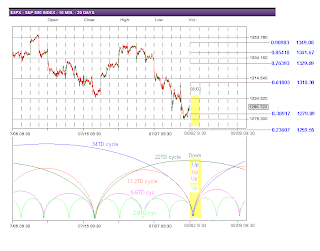 GL traders.  Do your own analysis.  Be careful.
Posted by Inlet at 2:14 PM