When we look at longer cycles we should remember that most of the downside occurs within the last 1/8th or so of the cycle.  For example: if it were a Wall cycle (~~4 1/2 months) we would expect the most damage within the last month of the cycle.  Or, 1/3 of a Kitchin Cycle (~~13 1/2 months) would have the most down side action with the last 2 months of the cycle.  We are entering the period where we should start seeing that down side pressure from the 1/3 Kitchin cycle early in November and the down side pressure from the Wall Cycle by the end of November.

Additionally we have the interplay of the shorter cycles (which I will try to cover weekly) as these longer cycles start giving us market weakness strengthening throughout November and reaching a point of maximum downside by year end.

Here is the picture for November: 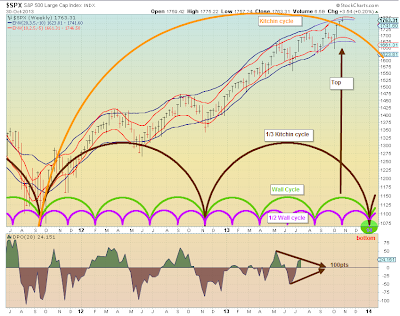 Expected the week just past to end up to the down side.  Instead the SPX was up about 1% for the week.  The shorter 12TD cycle appears to have asserted itself, and now should be turning down so for the coming week we should see the 12TD and 23/24TD (lunar) shorter cycles down. The 1/2 Wall cycle is down as the Wall cycle tops. So I would not be surprised to see 1 or 2 days down with some vigor... 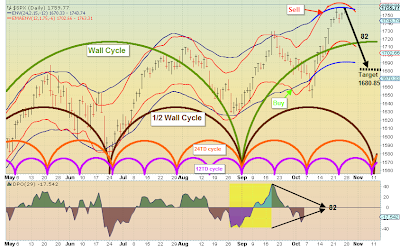 Update:  Take a look at new post on cycles:

I had the market direction correct for the week just ended, but I was not aggressive enough on my upside projections.  We may have seen the top of this 23TD (lunar) cycle as we there was a full moon Oct 18.

Assuming a top we should see 2 weeks down for the 23TD (lunar) cycle into the new moon in early November.  After that we will see as some longer cycles may exert more pressure than they have in the recent past (Wall cycle, 1/3 Kitchin cycle) as they should bottom in early January.

Here is a visual for the next week: 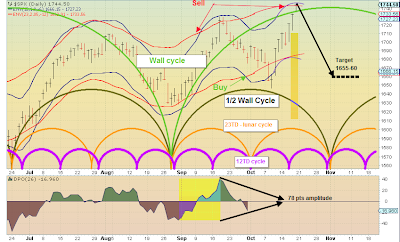 The week started out as if it was going to be a disaster for the bulls and an all you can eat picnic for the bears.  Looked like my expectations of a move up to SPX 1700 was a fantasy...  Then Thursday happened and the market regained what it had lost Mon-Wed.  By Friday we saw the SPX 1700.  The spring got wound tight the first 3 days and reacted strongly Thur when it was released.  So the market bottomed a couple of days late (new moon was Saturday), but the large caps turned up as expected (small caps pretty much flat for the week).

Can the Mess in DC affect the cycles?  I  would think so in the short term (a few days), but longer term the cycles will follow their natural course.  One thing is fairly certain, unless we get some resolution (like - kick the can) volatility will increase.  I suspect any short term agreement of 2-3 months will weigh on the market adding to any natural cyclic down turn (which I believe will start around mid October).

First though any agreement (even short term) would probably boost the market for a week or so.  Don't forget earnings season is upon us.  Appears the eateries are missing (5 of 5 last week), two large banks looked less than robust and it appears Penny's is into heavy discounting which is impacting retailers (Gap, Fitch, etc.),

It is my opinion we have several factors converging that could give us a 10-15% correction by the end of the year.  In the meantime next week should be up 1 % or so. 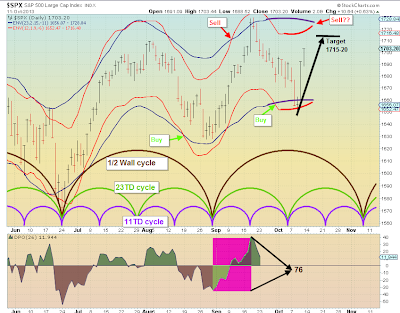 You may have noticed last week the Russell and NAS were setting new highs as the SandP 500 and DJIA were down.  Most of the time we expect these indexes to move in synch not diverge.

So as we were seeing a head and shoulders on the SPX one would expect to see an inverse Head and shoulders for RWM (inverse Russell 2000).  We didn't see that.  Instead we saw a "W" pattern.  Take a look:

So how do we explain this divergence from a cycle perspective.  I looked and I saw that instead of the 23TD cycle being dominant for the Russell 2000 that the 1/2 Wall Cycle (~~50TDs) was dominant.  So this cycle was topping (dominating the Russell) as the 23TD was bottoming (dominating the SandP 500).  See for yourself: 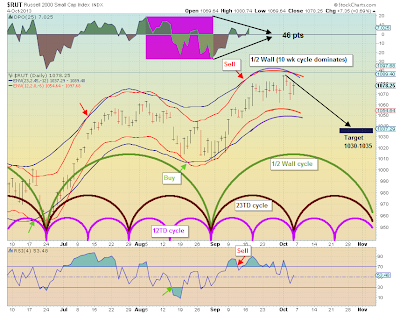 So we cannot assume that these indexes will behave the same going forward.  It appears the 1/2 Wall cycle is down (Russell) now and the 23TD cycle (SPX) should be turning up now.  In short the Russell should lead any downturn, so watch the Russell for the expected move by the larger (DJIA, SPX) stock indexes.

The dominant cycle is the 23TD (lunar) cycle and we just experienced a new moon phase Saturday Oct 4 so Thursday was possibly the cycle low (but a low on Monday is also possible).  Regardless next week should close up as this cycle turns up. 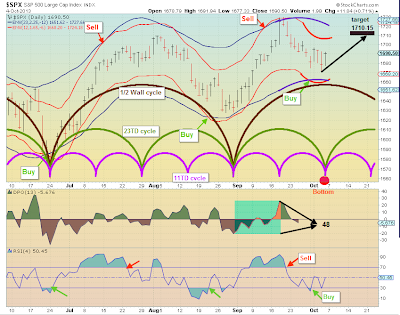 Does his outlook match what I have told you?

New moon Oct 5 and that often marks monthly lows (Friday Oct 4 or Mon Oct 7).  This may be an exception even though there should be some move up into mid-October.  After mid-month there should be substantial downside pressures as  longer cycles have topped and had time to build some downside momentum.  Add to that that the lunar cycle will also have topped by around Oct 18 and turned down.

So if we are to get a 10% or greater pullback in 2013 odds favor that happening after Oct 15.  Most of the downside for longer cycles will happen in the last half of the down leg as the turn down requires the first half of the leg to turn and develop downside momentum.  So if we get the expected down trend well under way by the end of October then it should accelerate in November and December and bottom by around year end.

Here is a visual of the longer term outlook: 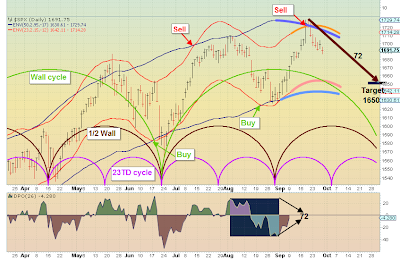