We have covered 2 of the 3 economic cycles we identified as important within the economy.  We covered the Kitchin (inventory) cycle and  Jugular (investment) cycle.  This leaves the third cycle:

The last time all three of these cycles were bottoming in close proximity was in the 1970s.  So one might suspect that 2008-2018 will be similiar to the 1970s.  Of course, there will be differences - longer cycles like the K-Wave are at different time frames than in the 1970s.

We included the Kuznet cycle in our last post - so review that for a visual.  Here though is how this fits within the longer K-Cycle: 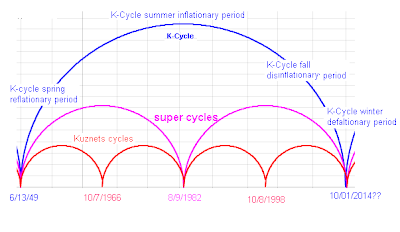 Next week should be a temporary swing trade bottom.  The 35TD and 22TD cycles should bottom by the end of the week.  I have placed limit orders to sell 1/2 of my "inverse" insurance (RWM) around $26.50.

Here is a visual of RWM: 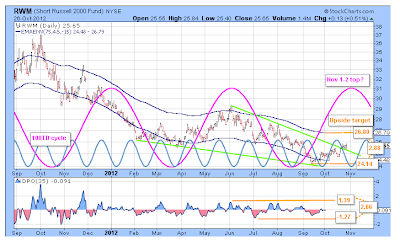 The three most important cycles are:

We previously discussed #1 - The inventory cycle (known as the Kitchin cycle) which is about 3 1/2 to 4 years.  Inventory run ups are followed by inventory draw downs which affects the level of commerce.  The market sell down may well be due to businesses being over inventoried and now an inventory reduction has started?

The investment cycle (Jugular) seems to be at an end as companies have invested to improve margins the past 3 1/2 or so years, but now are postponing investment as margin improvements are hard to achieve and has probably topped.

In 2008-2009 companies trimmed staff substantially.    Today we are back near the highs achieved in GDP, but we still have high levels of unemployment.  What happened to all those jobs from back in 2008-2009?  Companies used that as an excuse to upgrade manufacturing and processes using more machines and equipment.

Over time you can expect this trend to continue.  At the current time companies are meeting consumer demand with reduced staffs and improved productivity.  Even though machines/equipment can work 7/24 they require no vacation or holidays off, require no health insurance.  When demand is being met there is no reason to continue to invest in more productivity improvement machines and systems.    I believe we reached that point in the first half of 2012.

If you have the technical training and can program robotic controllers like Allen Bradley PLCs there are jobs for you.  If you have no specialized skills or training there are no jobs for you.  So we have a large unemployed segment of the population.  This supresses demand and the investment cycle stagnates.


Combined with a Kitchin cycle that is also looking for a bottom and you have a high risk equities market.  Here is a visual of the kitchin/Jugular cycles...

At this time it appears the 22TD, 34TD, Wall cycle (100TD) are synched to the down side (in addition to longe cycle impact).  So the bear appears to still be in control.  I expect that to continue through Oct and possibly the first week of Nov.  GL traders .. continue to hold your inverses (shorts). 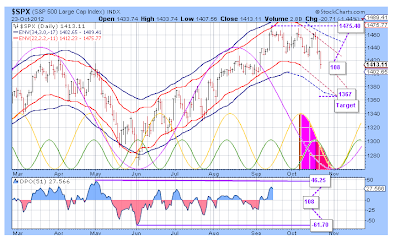 35TD downside satisfied, 100TD cycle amplitude should give us a pullback to around 1367: 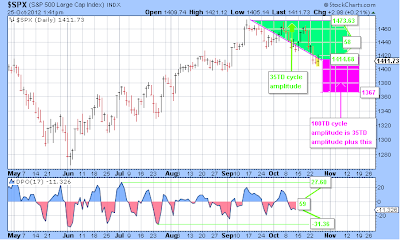 The desire/will pendulum within a complete cycle one can be pictured as follows:

Year of Dawn: from the lairs of night herds of Southern Desire emerge and begin to timidly graze.
Year of Noon: grown bold, the herds of desire graze everywhere.
Year of Sunset: the answering predators of Northern Will begin to trim the ranks.
Year of Midnight: the predators of will dine en masse in a royal contest for turf.
We derive these moods from only two sets of contraries: desire vs. will and joy (superfluous energy) vs hunger or gloomy revenge (lagging energy). These will modulate into a fourfold sequence such as that of the Years above, shown here as four phases of the (48 to 64 year) Kondratieff Wave.

The three most important cycles are:

We have mentioned these cycles in the past, but we have referred to the Kitchin Cycle most often.  The PMI reports tell us we are seeing a decline in manufacturing.  Freightliner, Paccar, Cummins, Whirlpool and others have announced cutbacks.

JD Hunt the largest trucker just reported a stinko quarter.  Fedex issued negative guidance.This implies that inventory levels are high and retailers/merchants are ordering less as they try to work off inventory.  Also, import levels are not increasing as the Eurozone is in a recession and China is showing slower growth.  All pointing to a slow down in inventory accumulation and probably a pull back in inventory levels.

In summary - an inventory trough is approaching.  Now, the economic cycles and equity cycles do not often occur at the same time.  If as expected the equity market moves first that could occur in the 4th qtr of 2012 or 1st qtr of 2013.  It is due within the 3-4 year (average about 3.5 years or 42 months),  but may be nearer the 4 year (48 month) time frame because of Federal Reserve intervention.

Here is a visual  of the Kitchin and shorter nested cycles: 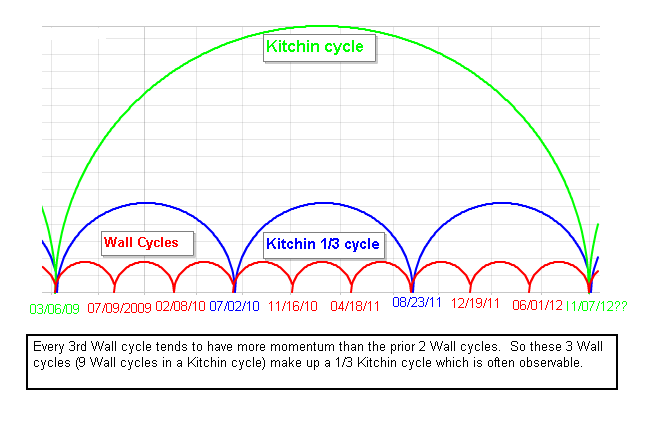 We will discuss other longer cycles in subsequent posts.  As you would expect if we get multiple economic cycles contributing to a move then that move becomes substantial.

Our call for the prior week (downside bias and suggesion of buying and inverse as insurance) was on the mark.  IMO the bears continue to be in control for now, so hold your inverses...  GL traders.
Posted by Inlet at 10:08 AM 3 comments:

In my last post I told you I thought the week would be up, and it was. Time to take a look at the month ahead. This means I will look at the longer 20 week (Wall) or 100TD cycle as well as the 33TD cycle. Also it appears the 22TD cycle is starting to have more influence.

The 100TD/Wall cycle topped toward the end of August. Often a cycle's largest impact is in the last part of a leg. The Wall Cycle is now at the point where I would expect that impact to start to exert its downward pressure.

Looking at two indicators (MFI - Money Flow Indicator) and DPO (Detrended Price) I see that the Money Flow is down even though the DJIA and S&P are near highs. These divergences between Price and Money flow to the down side often occur at tops (The divergence often is to the upside at a bottom).

The DPO shows us the part of the price due to cyclical activity. If I use a parameter of "51" then I should see the portion of price movement due to the 100TD and shorter cycles (33TD and 22 TD cycles for example). This movement appears to be around 109 points over a half span (top to bottom or bottom to top) of the 100TD (Wall or 20 week) cycle.

The 100TD cycle is down and should bottom around 11/9 (election week?) with a target of 1320. Here is a visual (chart) showing the points discussed: 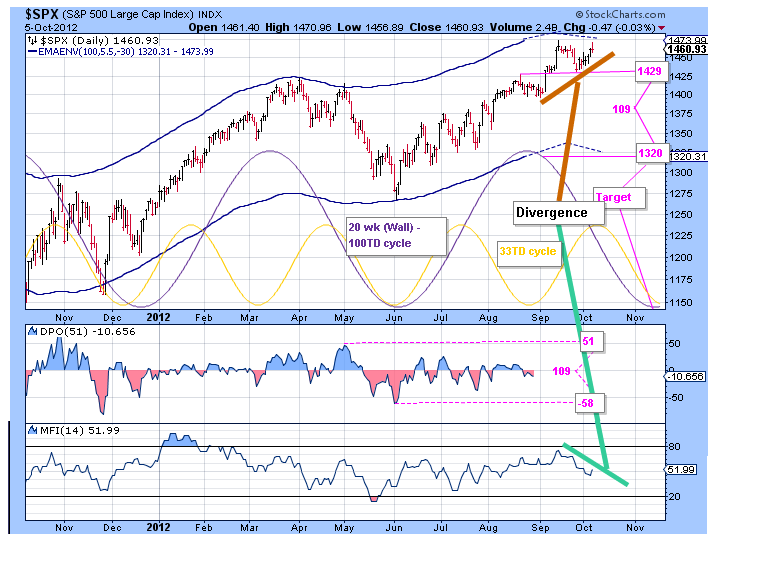 The 33TD cycle should top by the middle of next week (Oct 10?). Keep in mind the Wall cycle is down. Also th upside according to the 33TD DPO (parameter "17") is near to being met.

Looks like a potential double top aound 1478 at this time. After that the 33TD cycle should be down thru late Oct or early Nov. So starting by the middle of next week we have the Wall Cycle and 33TD cycle providing some downside pressure through the latter part of October.

Will we get an 8-10% correction into the election? Appears possible.
Here is a visual high lighting the 33TD cycle: 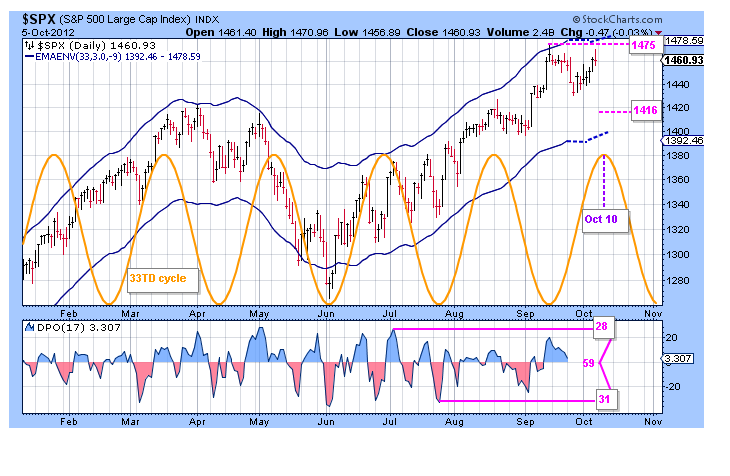 Finally as I  mentioned the 22TD cycle seems to be emerging and becoming a factor in the cyclic activity again.   It is up (and should be for the next 6-8 trading days).

This will somewhat inhibit the downside from the longer (Wall and 33TD) cycles.  So the next week should have a slight downward bias but the range will be limited by the upside from the 22TD cycle.  Can you say sideways for the next week?   The last 2 weeks of Oct (and first week of Nov?) has the potential of much more down side.

Here is a visual of the 22TD cycle: 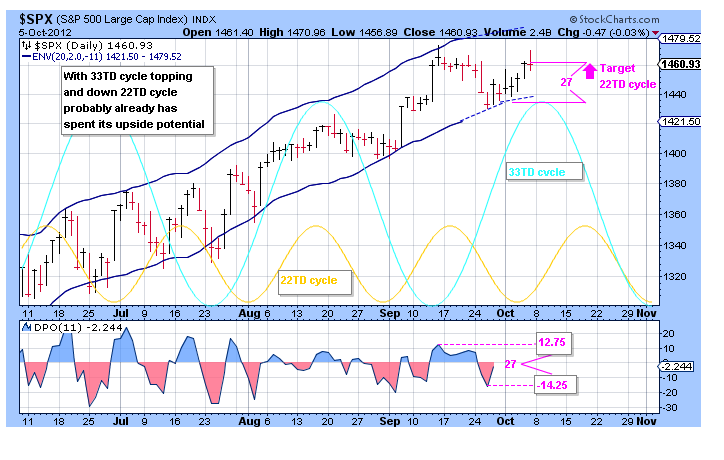 GL traders.  Might be a good idea to add some inverse ETFs to protect yourself over the next few days.
Posted by Inlet at 2:08 PM 5 comments: