Comments and outlook for August 2011

The Kitchin business cycle is 42 months ideally (may vary from 3-5 years).  The bottom was around March 9, 2009.  So half a cycle to the peak would be 21 months to around Dec 9, 2010.  Given the revised GDP numbers for the first quarter and for the second quarter I think we are safe in saying we have seen a business slow down in the first half of 2011 (as we would expect if the Kitchin cycle peaked in late 2010).  So BIG picture is we now have the business cycle slowing down and that should last another 14 months or so if we get a 42 month Kitchin cycle. March  2009 plus 42 months is 3.5 years or September 2012.

Within the Kitchin there are 9 Wall cycles of 20 weeks.  The 6th wall Cycle of 9 should bottom in mid August.  In addition we have a 22TD cycle topping now (Aug 1-2) and bottoming around Aug 17.  The 34 TD cycle is bottoming now (Aug 1-2) and turning up.  The 65TD cycle is topping and turning down.  So in mid August we have the 22TD cycle bottoming along  the 20 week cycle.  The 65TD cycle  is down into mid August and beyond.

So after Aug 2 (bottom?) we get a few days (my guess is 4-5 days) up from the 34TD cycle being up and after that the longer cycles along with the 22TD cycle abort any attempt to rally.   So I am looking for lower highs followed by lower lows in by mid August.  After the low in mid August we will get another attempt at rallying but you have the 65TD cycle still down.  The 20 week cycle will have turned up, but will take some time to gather upward momentum.  Finally the 34TD cycle will top the third week in August and turn down.  So I expect the rally after August 17 to be rather weak also (another lower high?).  This should play into a rather major bottom in mid September.

Here is a chart of these longer cycles: 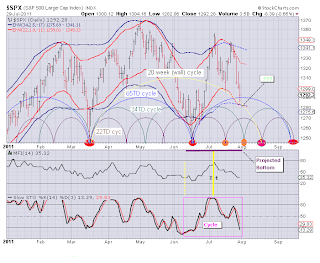 The minor top in early August should be around Aug 8-9 .  The minor top in the second half of Aug should be around  Aug 25.  We should see a bottom the first 2 days of Aug, and another bottom around Aug 17.  There is a third minor bottom that should occur in early Sept.  The mid month bottom is the most significant bottom in August.  Here is a zoom in chart of the shorter cycles showing Aug:

GL traders.  I have tried to summarize August without being too verbose.  Do you own analysis.  Comments, feedback and your opinions always welcome.

Here is a graph of seasonal trends for August.  Compare it to our cycle outlook: 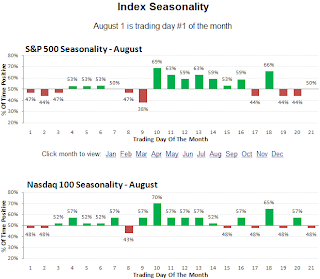