It’s worth considering the current Shiller P/E near 24 (S&P 500 divided by the 10-year average of inflation-adjusted earnings) in the context of rising yields on competing securities. Both the Dow Jones Utility Average and the Dow Jones Corporate Bond Average are down more than 5% from their recent 26-week highs. Note recent 10 year treasury yields almost double lows and Verizon 10 year bonds over 5 %.

The last time we saw this combination of weakness in interest-sensitive sectors with the Shiller P/E even above 18 was in September 2008, just before the market collapsed that year. We observed a similar deterioration following overvalued, overbought, over bullish syndromes in January 2000 (though be aware that it took several more months of top formation for the market to decline in earnest) and June-September 1987. This illustrates our discomfort with speculative risk-taking here. We could be witnessing a 40-50% decline starting later in the year (I believe it could be under way by mid October).

In the mean time there is next week. the 23TD cycle should have topped by Tuesday Sep 17 and head down (some refer to this as the lunar cycle as it approximate a lunar cycle in calendar days - it also approximates 1/4 of a wall cycle).   This seems to be the more dominant of the shorter cycles, but the 11-12TD cycle bottoms as the 23-24TD cycle tops. The 1/2 Wall cycle remains up but will be losing upside momentum soon.

Summary for the week - up Monday into Tuesday and down starting Tuesday into end  of the week,  For the week the market declines around 1.5%?? 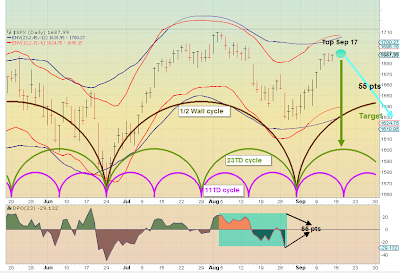