The prior week showed little volatility and closed the week largely unchanged (up very moderately).  I had expected a slight pullback instead of the slight advance.  Can't always be exact when you have the shorter cycles going in opposite directions and the longer cycles at a point where they should change direction.

This week the longer cycles will be farther along the turn down and should start showing some added influence. The half Wall cycle is up but should top during the week so its upside momentum should be about spent. Overall though downside influence should prevail for the week.

Here is a visual for the short term cycles: 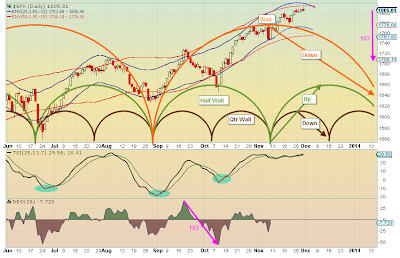 As we follow the cycles we look for other clues (context) as to what the market may do over the next few months.  Saw a chart of G7 industrial output and leading indicators.  Noted the similarity between 2005-07 and 2011-13.  So I placed the 2005-07 results underneath the 2011-13 results so you could observe what I saw. Does this mean we see another 2009?  not necessarily, but then maybe we see that or worse.

Here is the chart - you be the judge: 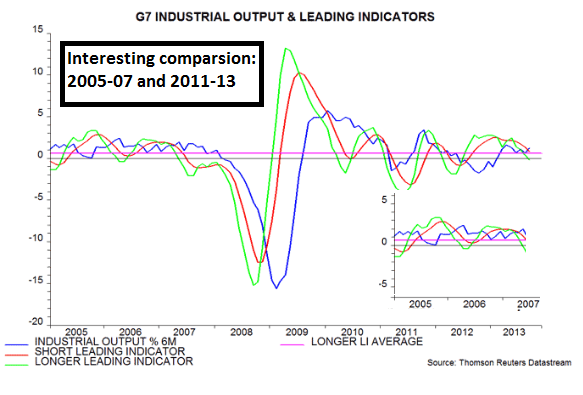 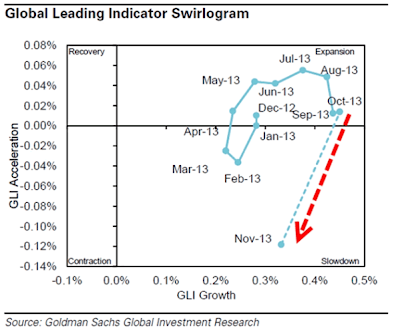 I speculated the week just past would be sideways with a modest range.  So we were down 3 days on the DOW and up 2 days with a slight gain for the week.  Not a bad call for the week.  The one prediction I will make for the coming week is Thursday will be unchanged!!!

The Wall cycle is now down and increasing in downside momentum. The quarter Wall (lunar) Cycle should also be down.  The Half Wall is up,   This combination will give us sideways action, but the bias should be to the downside.  Again I expect volatility to be moderate and no huge moves before December....

How do we identify a bubble?

Early in a cyclic bull market the moves are large and long (relatively speaking).  As the market advances usually the moves become smaller and shorter. By the time we reach bubble territory the cycles have become frequent and shallow. So we know what to look for to know when the markets are becoming over valued.

Here is the current situation: 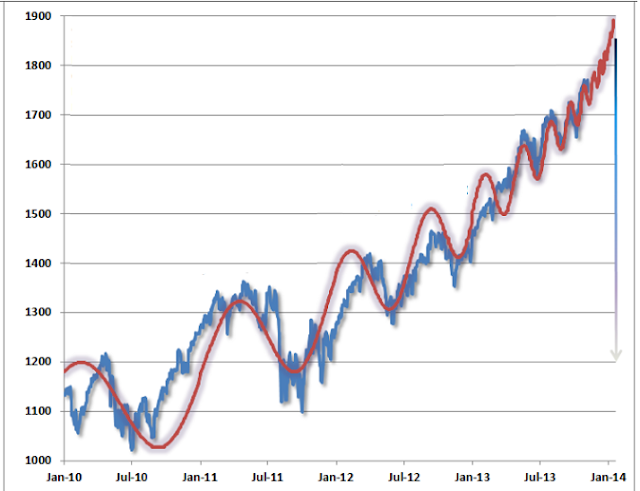 The market continues up.  As I have commented in the past RIGHT translated cycles (top past mid cycle) occur within a rising trend.  And the last 3 intermediate cycles have been right translated.  So until proven otherwise the market is in a rising trend even though I anticipate a top in the near future.

I also mentioned last week I expected sideways to up action this past and current week.  Last week we got upside action, so this week stands an improved chance of some downside action, but overall I expect sideways without much upside or downside action.

The Wall cycle should have topped and turned down.  The Half Wall cycle bottomed and is up (as did the Qtr Wall cycle) which offsets the Wall cycle (hence the sideways expectation).

The longest cycle most cycle advocates follow is the K-Wave (about 60 years) which last bottomed in 1949 (according to most cyclists).  The 2 cycles contained in the K-Wave are often referred to as Super Cycles and are about 32 years in length (Last bottom 1982).  Each Super cycle contains 2 Kuznet cycles (about 16 years in length - last bottom around 1998.  Then there is the Juglar cycle (about 8 years in length) and finally the Kitchin cycles (2 in a Juglar cycle) which we often refer to.  Here is a visual: 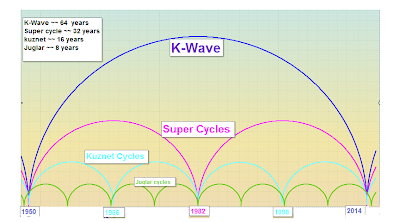 The week did not play out as anticipated.  Mixed week with DJIA up, but some of the other indexes down for the week.  Any pull back during the week was not near the expected pull back.  It seems the 23TD (lunar or quarter Wall) cycle is no longer dominant, but the Wall cycle(140 calendar days) appears to have become dominant.  I find the change of dominance of cycles one of the least predictable events.

So we see a small pull back during the week as the Wall Tops (dominates) and the 23TD and half Wall cycles bottoms.  Here is a visual: 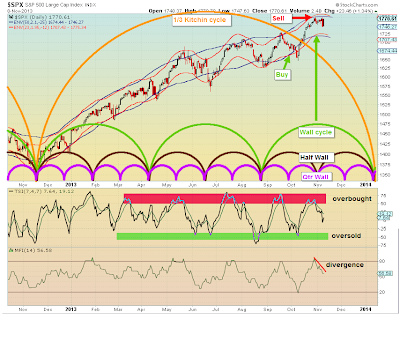 GL traders - the Wall cycle is now down  into early Jan 2014 and if as expected it dominates 2013 should finish down, but the next 2 weeks will be sideways to slightly up.
Posted by Inlet at 6:49 PM 9 comments:

The Kitchin Cycle (is it Bibical?)

Just a small sample of secrets revealed in the Bible that may tells one what to expect.

Nazi extermination camps operated 3 1/2 years. Was the demonic attempt to exterminate the Jewish people foretold in the Bible?  3 1/2 years is a oft repeated time frame in the Bible.  It is 42 months or what is referred to as a Kitchin cycle.

Also, 7 is a number common in the Bible.  Seven days (the seventh day is the Sabbath, 7th year is a Sabbath year, 49 years (7x7) is followed by Jubilee.  Revelation is sometimes referred to as the "Book of 7s" because of the common occurrence of that number in Revelations.

I am not pushing the Christian faith, just observing cycle/patterns in the Bible and the accuracy of prophecy made as long 3500 years ago (Daniel).

The big cap stocks (S and P, Dow) do not seem to want to pull back and give us a cycle bottom.  On the other hand the NAZ and Russell 2K were down for the week. So we have a mixed market whereas I expected a pull back of the whole market.  But the down leg of the cycle should last most of the week.  We will know by Friday.

Here is a visual of the market (SPX): 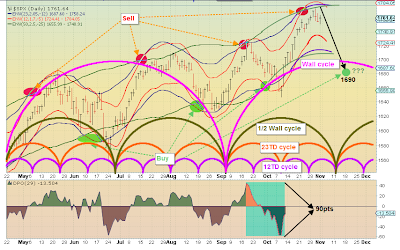