Got some minor weakness early in July (less than expected) and then up, up and away last 3 weeks of July.  Market less weak than I expected in July as I expected summer sluggishness most of the month to give us sideways to down action.

Appears we might get weakness early in August first 8-10 trading days and finish with some upside push the last part of August. 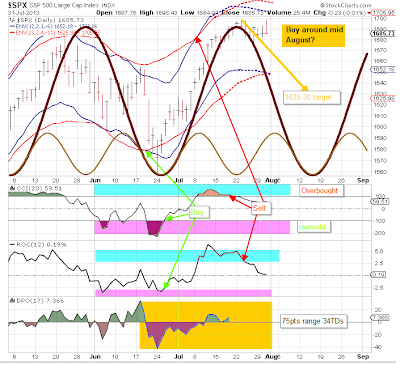 The 1/3 Kitchin cycle bottomed in Mid November and is 13.5 months long which implies a top in late May or early June.  So this cycle is now down, but early in its down phase so the effect is still minimal.

The Kitchin cycle is up (41-42 months) but early in its up phase.  So the longer cycles have a minor impact to the down side....

Shorter cycles such as the 1/2 and 1/8 Wall  offset, so overall it appears we have a mixed bag. The last signal from our analysis/charts was a sell signal.  The week will probably work sideways with a downside bias. 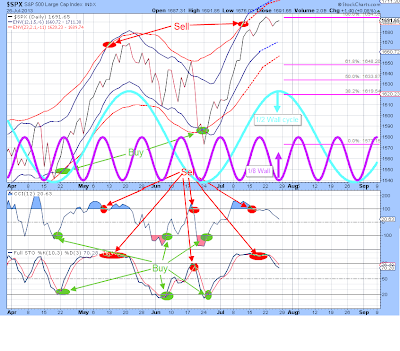 I had opined we would see some downside in July, but stated I felt it would be moderate and not a major down turn as many seemed to expect.  Seems even my outlook was too bearish as some of the major indexes set all time highs this past week.

My short term calls appear to have been 3-4 days early on average - so July has been a cruel month as my predictions go.  Still there is enough time left we could see July end up flat or down slightly if we can get a few more reports like GOOG and MSFT.  I guess time will tell.

Since my short term calls tended to be early then this week should be a down week?  Let's see what the charts say (longer term chart SPX): 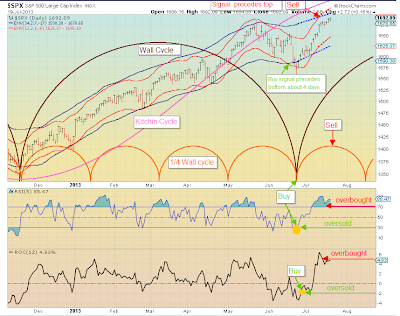 Here is a visual showing the discussed indicators: 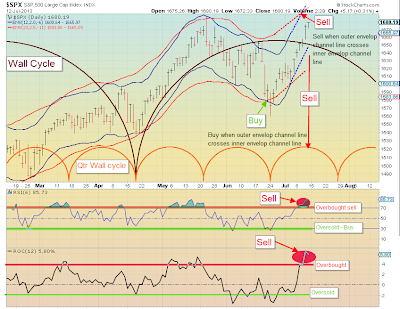 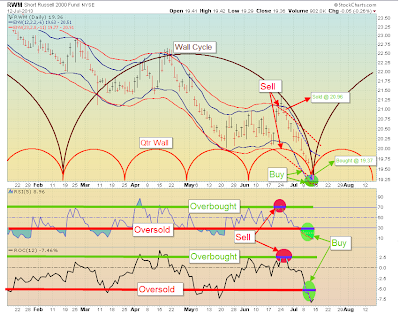 The Wall cycle is made up of shorter cycles - each about 1/8 of the Wall cycle (12-13 days).  See the chart below for trading entry/exit using these shorter cycles.  The Wall cycles gives you a frame for positioning the shorter cycles.  As with most cycles there may be some variability in cycle lengths, but if one is not greedy (tries to squeeze the last penny out of a trade) they should do well charting the SPX/SPY and trading the SPY.  Shorter time frames (1 hour for example) may improve entry/exit points. 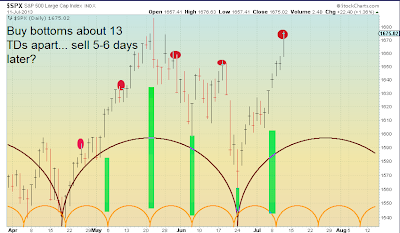 If this level of trading is too frequent for you then you can focus on longer periods such as a quarter Wall cycle (usually about 23-24 TDs (1/4 * 140 or 35 calendar days),  The chart below shows entry/exit points using quarter Wall cycles, 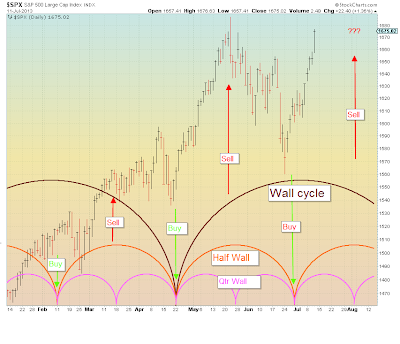 His research shows that the world-wide tendency to fight major wars rises and falls over time. He currently projects a peak about 2020 with rising war fever from 2013 until 2020. There is no shortage of possible war zones. As conditions worsen during the balance of this decade, nations will be inclined to distract and control their populace via wars, increased government control, and management of the economy.

They are due to peak in the summer of 2013 and decline into 2019. Market tops often occur at or near peaks in sun spots. This is an approximate 10 - 13 year cycle. Economic and political upheavals tend to occur at or near the peak of sun spot cycles.

In spite of all the negative news from around the world we got more upside than I expected.  Interest rates on the 10 year popped on Friday (usually not good), oil was at a several months high (usually not good), Egypt seems ready to "blow", unrest in Portugal , etc.  All seemed to take back seat to the employment numbers, which seemed a bit strange as part time jobs added exceeded total jobs added (that implies loss of full time jobs?).

It now looks as if we have a setup for a down week.  The gap down from several days ago appears to have been filled (was needed before the market proceeded down?).  Also we now have move cycles lining up to the down side. Here is a daily S&P 500 chart: 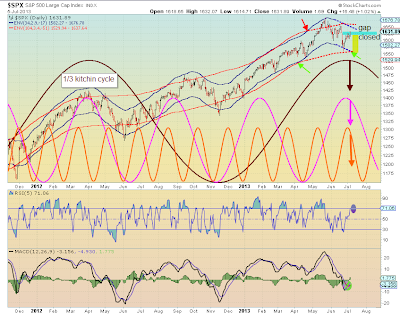 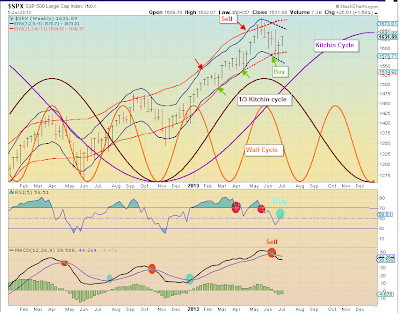 Armstrong Economics (Martin Armstrong)
His economic confidence model projects a peak in confidence in August 2013, a bottom in September 2014, and another peak in October 2015. The decline into January 2020 should be severe. He expects a world-wide crash and contraction in economies from 2015 - 2020.

Harry Dent - Demographics
Stock prices should drop, on average, for the balance of this decade, perhaps as low as 3,300 on the Dow Jones Industrial Average. Demographic cycles in the United States (and elsewhere) indicate a contraction in real terms for most of this decade.