I was too cautious in my outlook as the SPX was up about twice my target.  Thought it might over shoot my target and mentioned if we set new highs to consider a position in RWM. Well ^Rut still lagging to upside and no new high (ditto for the DOW).

Looks like we may have reached a short term swing high verified by Friday's failure to close higher than Thursday  See the chart: 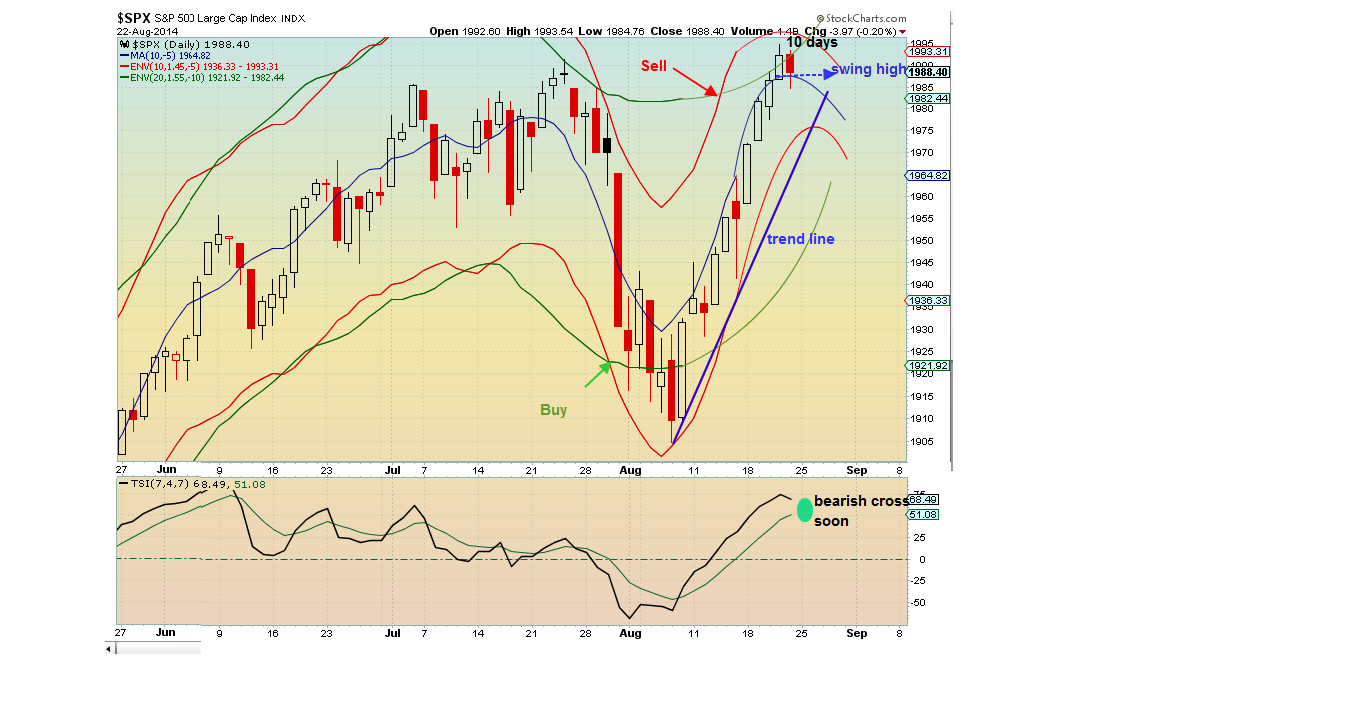 Hard to figure - was the market up/down/sideways last week.  The SPX500 was up about 1%, the Dow just over 1/2% up and R2k was down. As you probably know if you have followed my blog for a while I trade RWM (inverse R2K, R2K down then RWM up).  I guess I can claim to be right by picking one Index, but I generally chart SPX so we were sideways almost (right on no big move) and was looking good mid week, but not so good by week end.  Not exactly as I called it, but close.

This next week we have 3 shorter cycles (1 month, 2 month, 4 month) up with some longer cycles down.  So moving up will encounter some headwinds (longer cycles down and who knows about Ukraine, Iraq, Syria, Hamas, etc.).  From a cycle perspective it looks like mixed during the week as the Market struggles upwards (my guess would be around +20 pts. on SPX500). 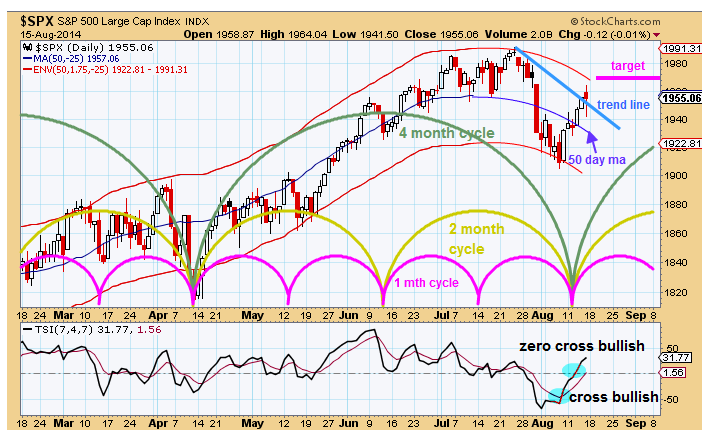 If we test/exceed old highs might want to trade some RWM?

I felt  the prior week would be mostly flat for the week with possibly a small drop.  It was flat with a small increase. Close, but not a bull's eye hit.  Looking at a short term chart it looks like monthly (lunar -28/29 calendar days) should bottom by Tues 8/11 (+/- 1 day) along with the half cycle (10-11 TDs).  So I see some potential downside in the early week.  By the end of the week the shorter cycles will partially offset the downside pressure of the longer cycles.  So it looks like a flat to down week. 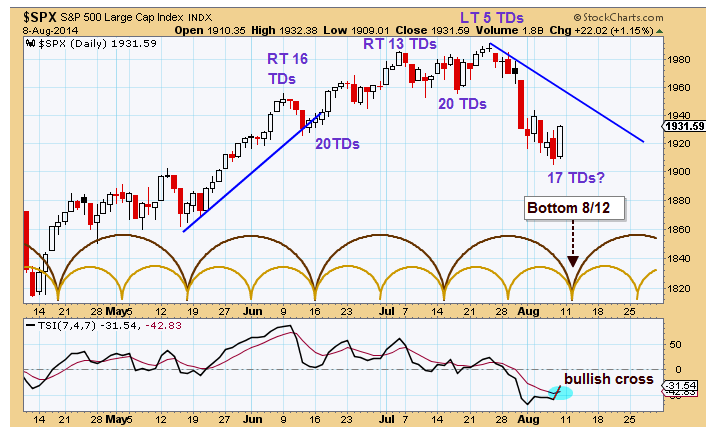 GL traders
Posted by Inlet at 8:02 AM No comments:

I noted in my post (start of 2nd half) the outlook for the remainder of the year.  Expectations were for a pullback into late September.  Too early to say for sure, but the outlook has gotten more negative this past week.  Here is the updated chart for the next few months: 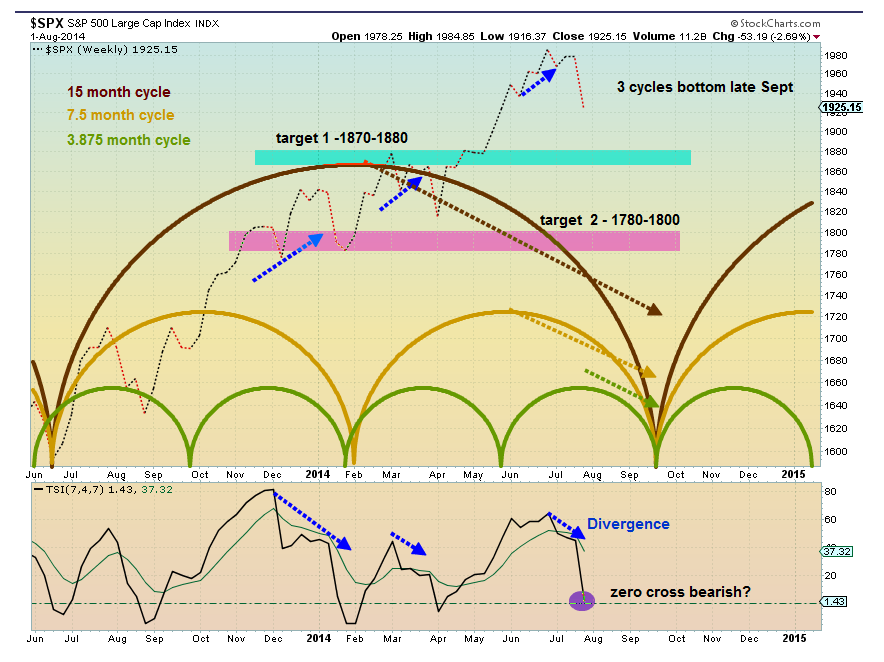 This next week the  2 month cycle should top and turn down resulting in 4 medium length cycles down....  This should more than offset the impact of shorter cycles such as the monthly cycle which is up.  There may be an attempt to rally but any upside should be limited over the next week and shortly after that the monthly cycle will also turn down leading to a negative outlook for August.  In summary - sideways to down this week and then down.  Here is a visual (short term): 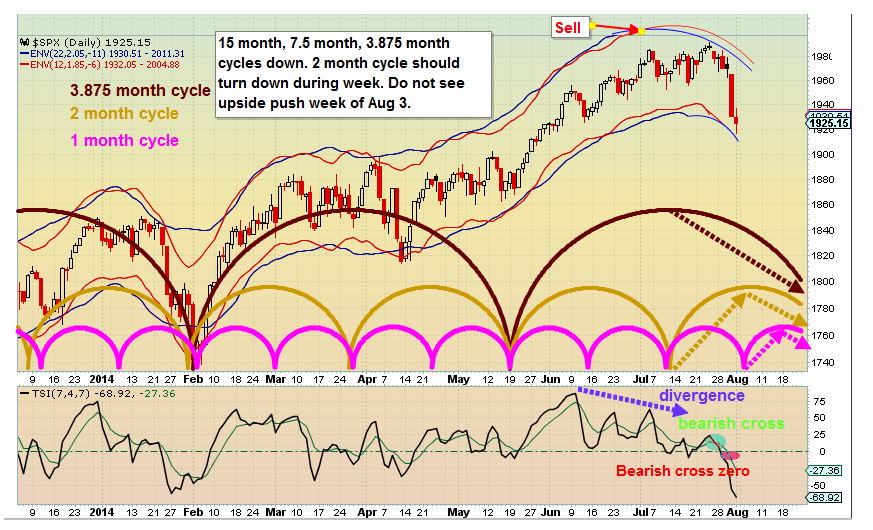 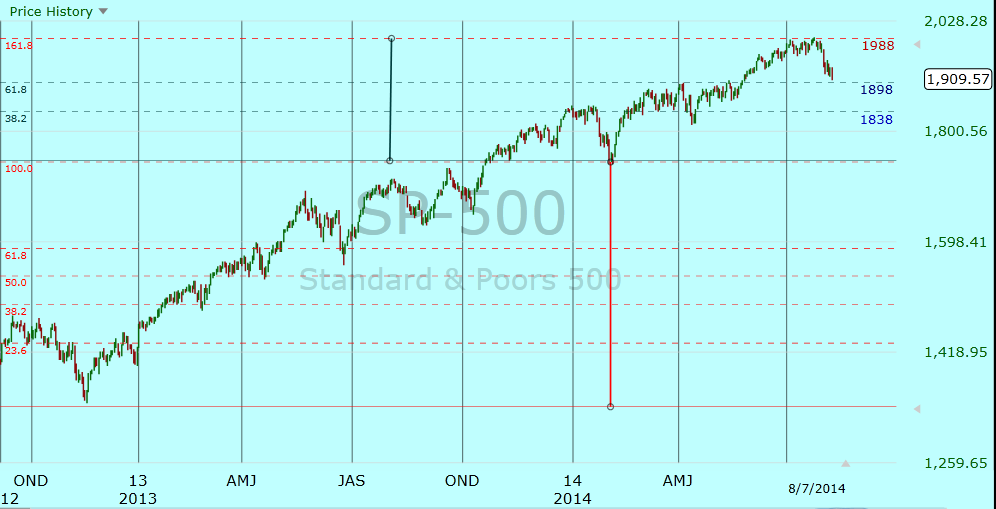 I have noted some interest in cycle lengths.  Here is a summary (other sources may list other cycles):

Cycles according to WD Gann:

Thus the 30 year time cycle will be divided into important probable turning points as follows: