We discussed and gave you a visual of the long term Kress cycles (120yr, 60yr, 40yr and 30yr) and you saw that in theory they all should bottom together in the second half of 2014.  This alone should make one wary of the market as I question just how precise these predictions are when it comes to an exact date.  Heck, if your are within 2-3 months on these long cycles I think you would call it a direct hit!!!

But, that is just part of the story as there are 12 cycles in the Kress cycle series.  The cycles shorter than the long cycles are still longer than most of us trade (definitely too long for swing trading).  They are the 24yr, 20yr, 12yr and 10 year cycles.  There are 5X24 Year cycles, 6x20 year cycles, 10x12 year cycles and 12x10 year cycles in the 120 year cycle.  And guess what - they are all scheduled to bottom in the second half of 2014. 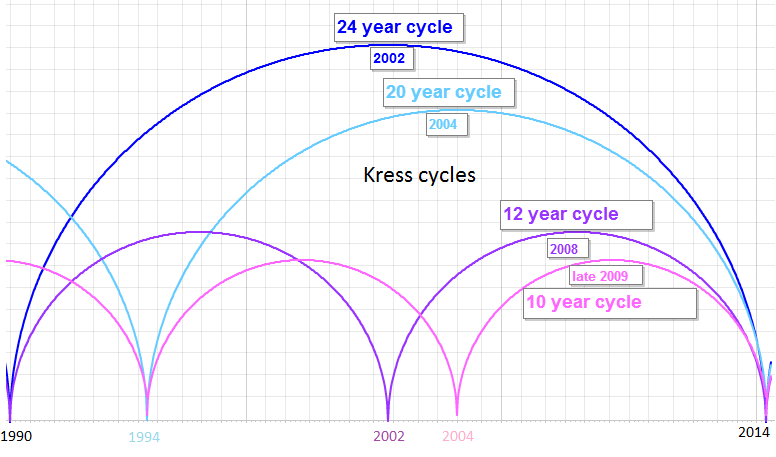 If you pursue this you will see the Fib relationship can be extended to the longer cycles.
Posted by Inlet at 9:25 AM 9 comments:

Depending on whom you follow determines the combination of cycles with which you are familiar.  Maybe it is the Hurst cycles (developed by JM Hurst).  Or, maybe you are a fan of Gann (cycles are generally based on 360 degrees in a circle).  Or, possibly you follow Martin Armstrong (he identified the Pi cycle).  David Knox Barker follows the Wall and  Kitchin cycles (I like their application to swing trading).

Then there are the cycle groups developed and followed by Bud Kress (I believe he passed away recently, but Clif Droke is a disciple you can follow).  Today our long view will be developed using the Kress Cycles.

The numeric time cycles which comprise the 120-year series include the 60-year, the 40-year, the 24-year, the 20-year and the 12-year. The 120-year is the primary composite cycle according to Kress. It includes three 40-year primary bias cycles and five 24-year primary direction cycles. The 60-year secondary composite cycle (which is analogous to the "K Wave") includes three 20-year secondary bias and five 12-year secondary direction cycles. As Kress points out in his latest report, "Excluding both composite cycles, this leaves four cycles which determine the market directional behavior for the three designations of time – years, quarters and weeks." In total, there are twelve cycles comprising the Kress cycle methodology.

Here is a visual of the longer cycles of the Kress Cycles: 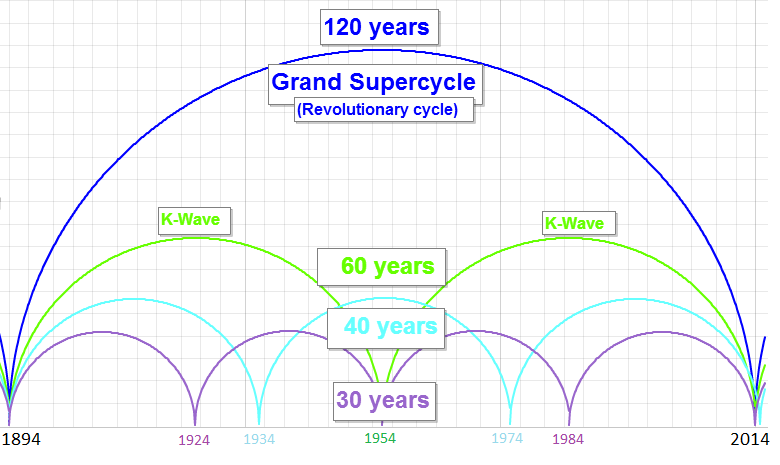 All these cycles should bottom in late 2014 (now that should be a bottom to write home about).

In my outlook for 2014 I showed a series of charts (and gave reasons) to be wary of the market.  My cycle chart (below) indicated a top mid  January. 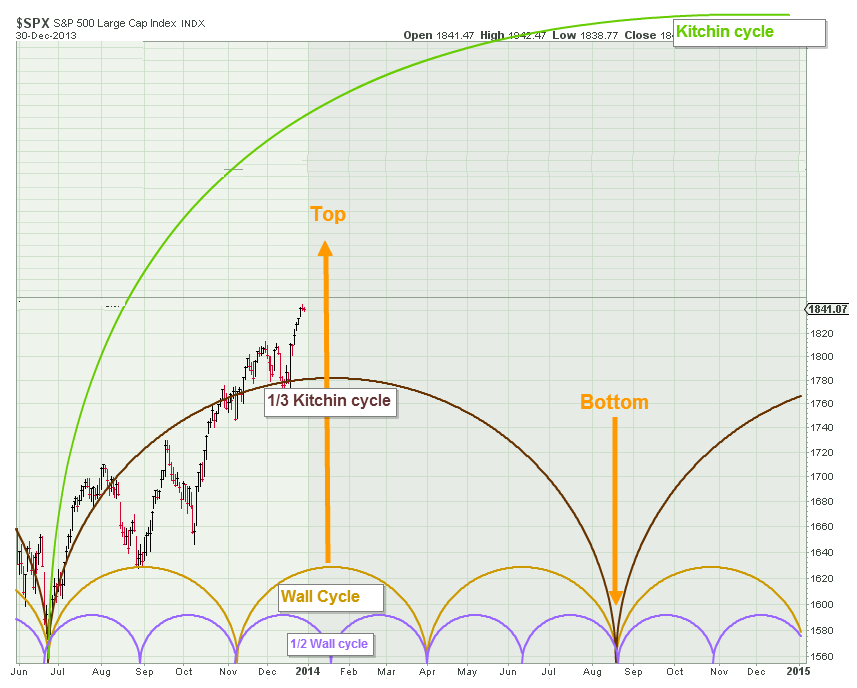 And I posted a comparison of 1929 and today's market.  If that comparison works out then we should have seen a market high followed by a steep sell down.  We got  a new high and possibly the start of a sizable pullback.  Time will tell - here is that comparison: 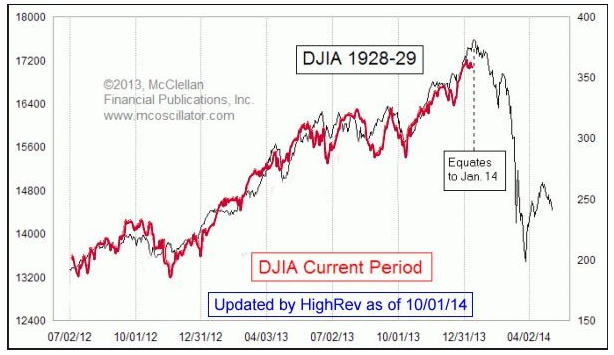 And in my outlook a couple of weeks ago I indicated a top coming (seems I may have been a week or so early as I expected a couple of hard down days last week and had indicated  a target of 1790.  Now I need to revise the possible downside based of the 100 day Wall cycle (as the 1790 projection was using a shorter DPO of the half Wall cycle). Should  lower the downside target for next 10 weeks.

Last week  I gave you several reasons to be wary of the market even though I expected more a sideways than a down market (got that wrong). Some questioned my conclusions (but I try to avoid technical fights) so my response when asked about the longer cycles:

This week seems there were a lot of future layoffs announced (IBM, TI, Sam's Club,  and several others).  When you start seeing lots of such announcements makes you say hmmmmm....  Earnings continue to be less than stellar as a whole.

Looks like we may be repeating the pattern we saw back in Aug/Sept the last time the  we saw a Wall cycle top and half Wall cycle bottom together.  The difference maker this time is the 1/3 Kitchin cycle is also topping and turning down so the downside may be greater??  Time will tell. 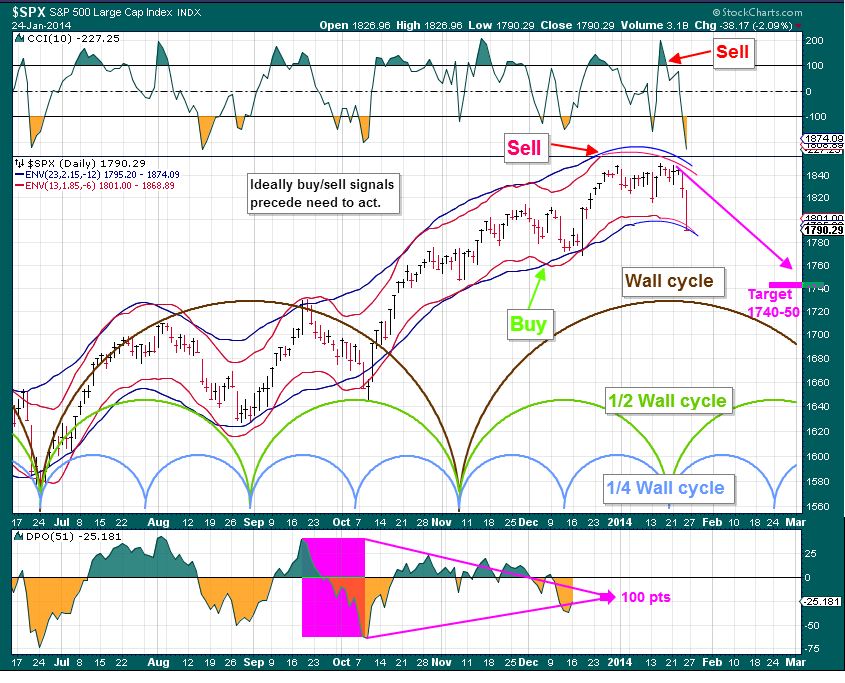 Update:  Looking at the lower trend line we should expect support around 1740-1750 so that is the next potential downside:

Of course Yellen's first act may be to "untaper" and increase QE to try and prevent a substantial market correction.  If that happens it could postpone a correction for a short period of time.

Another sideways week.  After Monday it appeared we may be in for a down week of a few percent, but nearly all that was lost Monday was regained Tuesday and Wednesday.  In some cases indexes made new highs.  Market moved down moderately Thursday and up Friday.  So for the year so far the market is essentially flat.

It appears all the new retirement money (401k, IRA, pension funding, etc.) has failed to move the market higher.  A lot of fuel burned without a launch of the rocket.

The talking heads on TV keep telling us about the positive #s.  Still it looks like retail for the 4th qtr 2013 was not healthy (Best Buy and others).  Consumers make up about 70% of the US economy, so it is hard to understand how the economy is doing well.  Employment number were pathetic (74,000).  So far earnings reports have not been that great (about 50% of companies just met or missed estimates).  Mortgage applications have been declining since May.  Building starts are declining and permits going forward are less still.  Auto sales are softening.

Despite 'blaming' the drop in the cost of dry bulk shipping on Colombian coal restrictions, it seems increasingly clear that the 40% collapse in the Baltic Dry Index since the start of the year is more than just that. While this is the worst start to a year in over 30 years, the scale of this meltdown is only matched by the total devastation that occurred in Q3 2008. Of course, the mainstream media will continue to ignore this dour index until it decides to rise once again, but for now, 9 days in a row of plunging prices is yet another canary in the global trade coalmine and suggests what inventory stacking that occurred in Q3/4 2013 is anything but sustained.

So fundamentally I see little that is positive as bank exposures are back at levels last seen 2007/2008.

Notional derivatives increased $6.2 trillion, or 3%, to $240.0 trillion. Notionals have now increased for three consecutive quarters, after having declined in five of the prior six quarters. 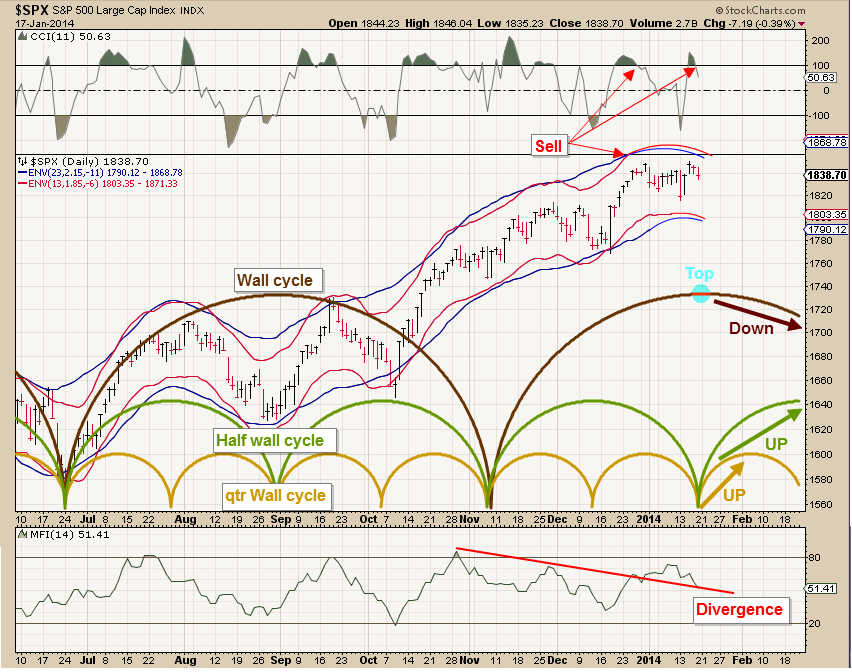 Minor downside during the past week, but really more sideways than down.  Seems market is down most of the day and recovers last hour to close slightly down or mixed for the day.  A lot of money entering the market that last hour to support the market.  Looking at some of the statistics retail investors have less money in cash and bonds and more money in equities  - levels last seen in 2007.

I believe this support without market advance will result in some downside pressure.  If that is correct we may see a couple of note worthy down days next week. 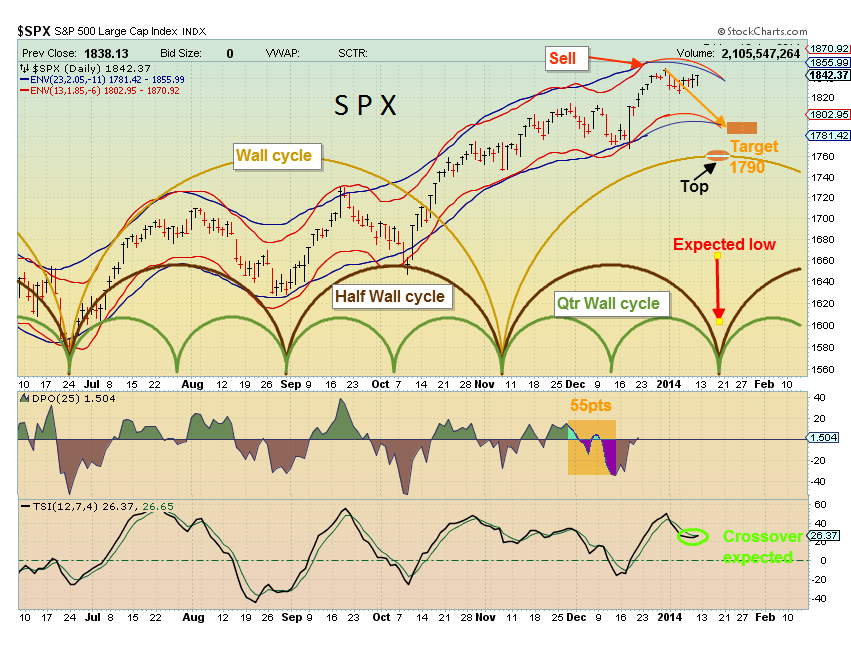 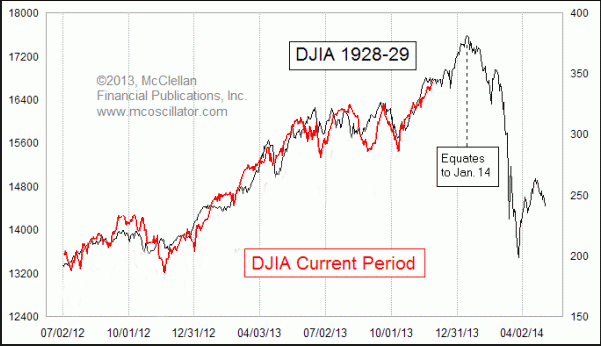 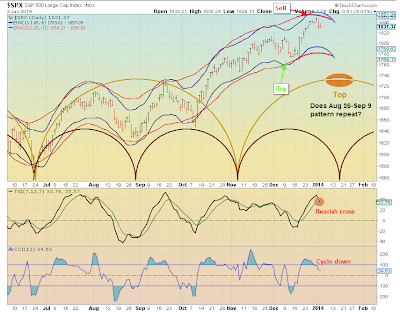 We are at or near a top.  If we get a repeat of late Aug and early Sept (Wall cycle topping with half Wall bottoming) then we get a 4-5% pull back into mid Jan a retest of current highs by mid March.