I expect the market to pull back into mid January as several cycles appear to be set to bottom then. Based on the 20 week DPI I am projecting a low in the 1340 area. Since we have other even longer cycles that may also be bottoming this may be too optimistic and a low in the 1200s for the S&P would not be surprising. After a bottom in mid January I expect some recovery into mid-February. 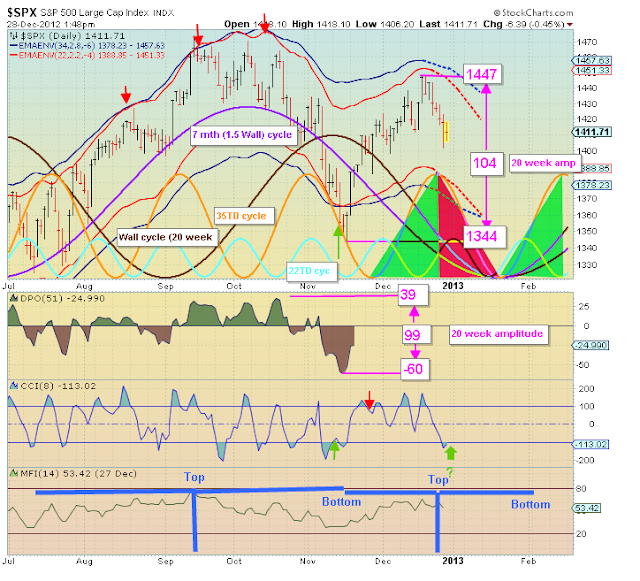 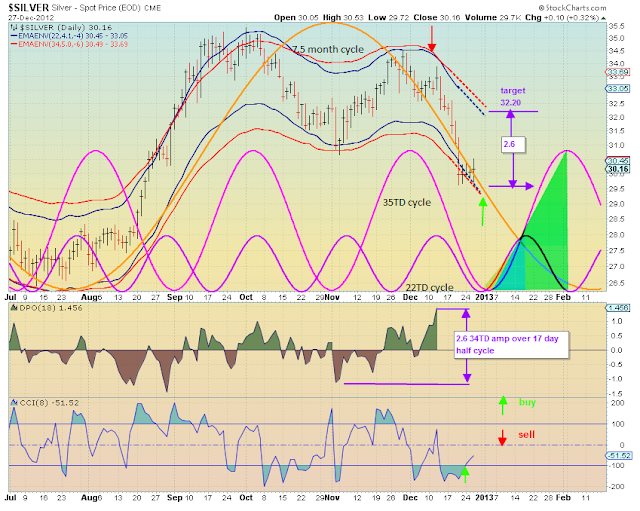 UPDATE: http://www.safehaven.com/article/28215/silver-knocks-at-cited-window-of-opportunity-in-4-sessions Seems to agree with my analysis.
Posted by Inlet at 2:48 PM 4 comments:

Looks like sideways most of the week. After that we should see some movement down the last day of 2012 and the first week of January.  see these 2 shorter cycles starting to offset the second week of January, but could still move down into Jan 11. Take a look: 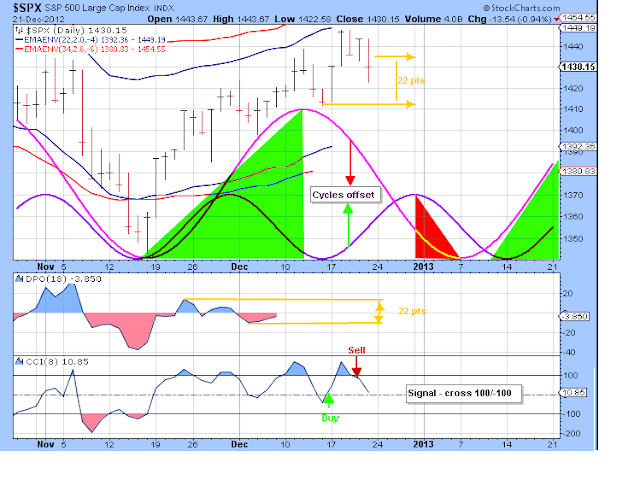 Well the Mayan end of the world came and we are still here.  So I guess it is OK to think there may be a 2013.  The cycle experts are calling for the bottoming of very long term cycles in the 2013-2015 time frame.  I have talked about these cycles in the past, but since I focus on more tradable (shorter) cycles I do not spend a lot of time on them.

These shorter cycles account for movement within the longer term trends.  As any student of the market can tell you the S&P will move 200 points (usually) to go up or down 100 points as a result of these shorter term cycles.

Just a reminder though -   the uptrend we have been in since the bottom in March 2009 is almost 4 years old and that is mature for an uptrend so we may be due a longer trend reversal to the downside.  If our government (president and congress) don't get their act together that reversal could be closer than many think.

But I digress - there are lots of blogs that cover fundamental and political happenings.  The cycles seem to be saying it could be mid January before we get any type of deal in Washington.  We will have several cycles bottoming in the mid January time frame (see charts prior post).

I believe if we get the expected selloff in early January then we may set the trend for the year.  Old market axiom - as goes the first week of January - so goes January.  As goes January so goes the year.  That does not mean that there will not be times you will want to be long, just more cautious than usual.

So I believe we set a bottom in January, reverse and set a top in mid April, pull back into early June. Move up into mid August.  Then the market moves down the rest of the year with an attempt to rally in September/October. 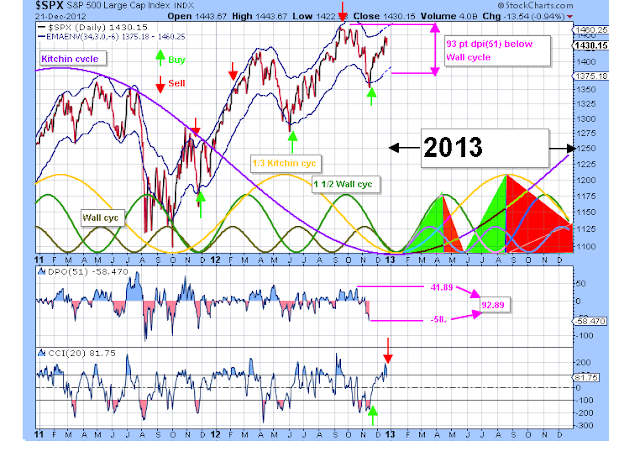 GL, Merry CliffMess and Happy New Year.
Posted by Inlet at 10:05 AM No comments:

After this review I have attempted to show this visually: 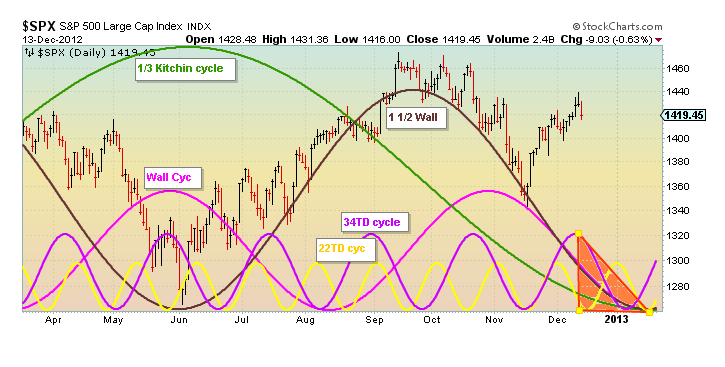 And the longer cycles (less cluttered): 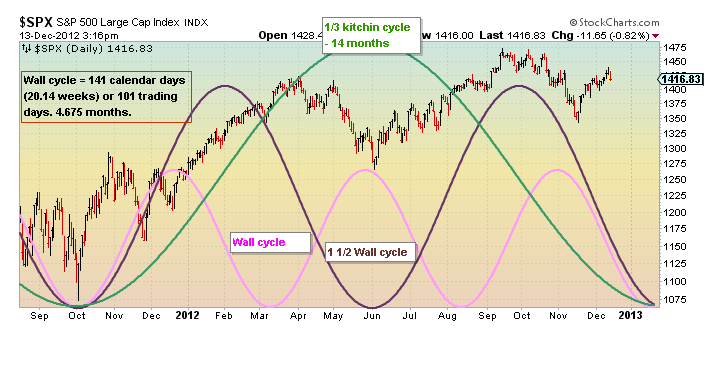 It appears we may have seen our rally for December and a sizable selloff over the next 4-6 weeks.  Time will tell.

GL, happy trading and Merry Christmas.
Posted by Inlet at 11:39 AM No comments:

Less movement than I thought would happen this past week.  Mixed close with S&P and DOW up, but NAZ down.   I had though the market as a whole would be down 1-2%.  Did not happen.

I have shifted my charts (short term cycles) a bit to better fit the data (I hope?).  The 22 TD cycle (lunar cycle) topped in late November and should bottom by late next week.  This cycle seems to have the most short term impact so we may get a 3-4% pull back during the week.  CCI dropped belown +100 which I view as a short term trading sell signal. Time will tell. 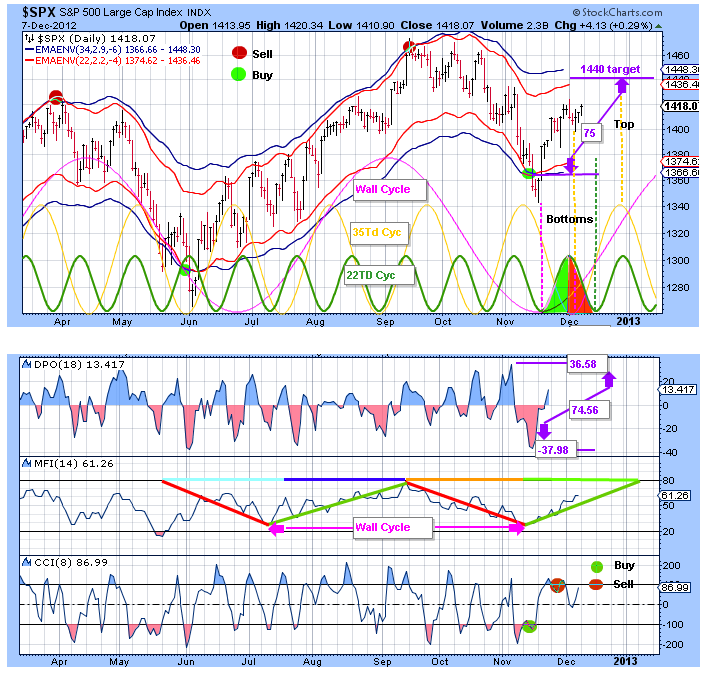 Shorter cycles are nested in longer cycles.  This was observed by students of cycles like PQ Wall. Wall called these nested cycles (9 Wall cycles - 20 weeks - 100 trading days in a Kitchin cycle.  And 16 Kitchin cycles in a K-Wave Super cycle [3.5 years x 16 = 56 years]) the Prime Cycles.

Here are these prime cycles: 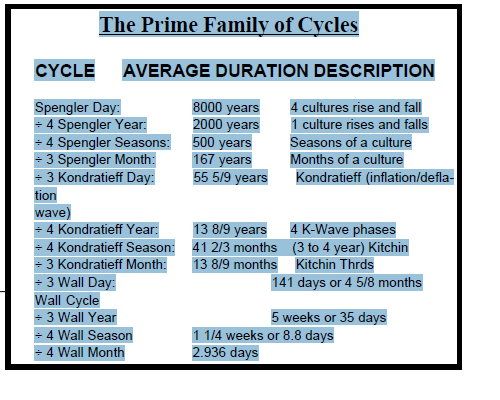 If you differ please post your rationale.
Posted by Inlet at 7:47 AM No comments:

Our outlook for November was a bit off the mark the last third or so the month as the market rallied more than expected.  Hard to anticipate what the market will do from day to day as the market is news driven out of Washington (nothing is getting done to resolve tax/budget issues).  But, I will give it my best effort....

The cycles should give us a bottom by the middle of the second week of December (December 12??).  Depending on the news any down move could be substantial.  So I would use trailing stops for any long positions to try and limit losses on any pullback.  By mid December we should see a move up into January.

Here is a visual of the longer cycles: 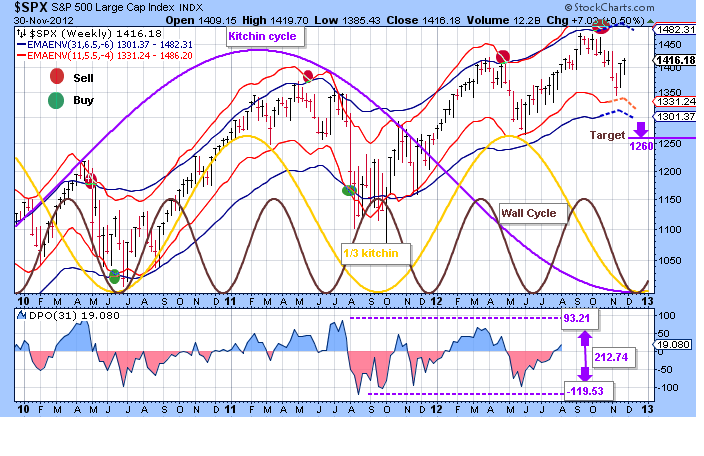 If the downside (see DPO) of these longer cycles is realized we could see a pullback of 200 or more S&P points.  With the foolishness going on in Washington - anything is possible.

Here is the shorter cycles: 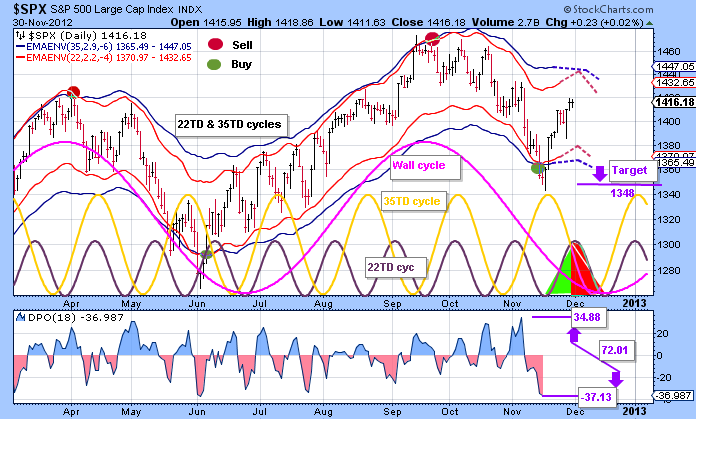 These shorter cycles are projecting a pullback of about 72 points.  So we expect a low in December around December 12 and a high toward the end of the month.

GL, traders.  Cash out inverses over the next 5-7 trading days and go long is my basic strategy for the month of December.