I don't suppose the markets are closed in the US for Canada Day, but is closed Thursday for Independence Day.  So that gives us 4 trading days for the week.

The market traded a bit higher than I would have thought last week, still it was mostly in the lower half of the envelop channel.  Looks like most indicators are neutral (RSI - in the middle between overbought/oversold; ditto for ROC; and other indicators).

Looks like a sideways week.   Tried to detail cycles a bit more to try and show the influences the market faces for the week with up cycles and down cycles off setting. See the chart below. 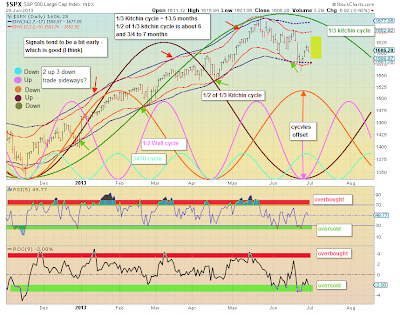 Charles Nenner Research
Stocks should peak in mid-2013 and fall until about 2020. Similarly, bonds should peak in the summer of 2013 and fall thereafter for 20 years. He bases his conclusions entirely on cycle research. He expects the Dow to fall to around 5,000 by 2018 - 2020.

Kress Cycles (Clif Droke)
The major 120 year cycle plus all minor cycles trend down into late 2014. The stock market should decline hard into late 2014.

Elliott Wave (Robert Prechter)
He believes that the stock market has peaked and has entered a generational bear-market. He anticipates a crash low in the market around 2016 - 2017.

Outlook last week was off somewhat as market ended lower at the end of the week.  I have been questioning if use of the 23 day cycle is appropriate.  JM Hurst stated that there could be an 11 day and 23 day cycle or alternatively a 17 day cycle (note - 17 day cycle is 1/2 the 34 day cycle).  Based on recent data over the past 6-7 months using a 17 day cycle may give a better fit of the data, so I am switching to a 17 and 34 day cycle combination for the shorter cycles.

The 34 TD cycle and 17 TD cycle offset, but since the 34TD cycle is more dominant the total result from these 2 cycles is an upside bias.  But we have the Wall cycle and the 1/3 Kitchin cycles now down so I expect sideways movement within the lower half of the envelopes below. 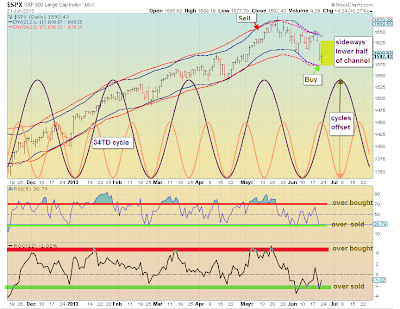 As expected June showed weakness.  Seemed to top a bit earlier than projected, but the data filled in the 2013 projection from January fairly nicely.  In July we have the 1/3 Kitchin cycle and Wall cycle down.  The Kitchin cycle is up.  The 34TD cycle is down early July then turns up.  So weakness early July as the 34TD cycle bottoms and less so the final 3 weeks of July, but I expect the market to continue to erode in July (unlike many I am not projecting a crash scenario - that probably doesn't happen until October).

So a nasty little dip in early July, then the market stabilizes and drifts lower into August.  Expect the normal dull summer market?

Here is my 2013 projection with data for most of June included:

Again the shorter cycles offset.  The 34TD cycle is more dominant and has bottomed and turned up.  This not only offsets the down side pressure of the shorter 23TD cycle, but to a large extent offsets longer cycles which are turning down (but not yet in a hard down phase).  So -  I expect the market to trade sideways for the week with an upside bias for the week as a whole: 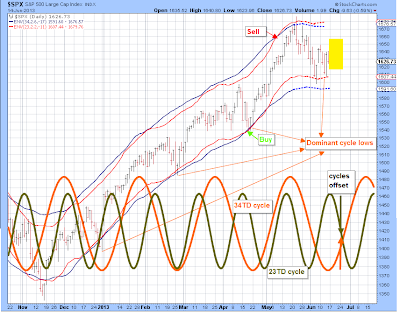 Continues sideways today (Jun 19 - 12:20) with little move up or down.  May get movement after FOMC statement.

6-20-13 11:15 am EDT - Upside bias ran out of steam as shorter cycle hard down and longer cycles down prevail since FOMC (Benny) met the press yesterday at 2:30pm EDT.  Looks like 1593 is next potential support:

The shorter cycles offset again this week.  But, the longer cycles should turn down no later than mid week.  So maybe a bit of a push up early week and a fade by mid week.  Overall for the week though sideways with the possibility of some minor loss by market close Friday. 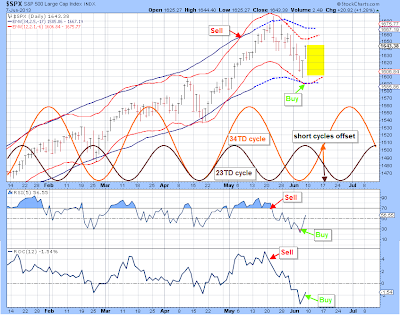 No new highs Monday, but appears longer cycles now taking over and pushing market down as shorter cycles offset:

If we haven't already topped (??) then this is the week I projected in my 2013 outlook as the week we top (have the 1/3 Kitchin cycle, a Wall cycle and a 34TD cycle topping).  So with 3 medium length cycles topping we should expect a sizable pullback in  last 3 weeks of June and extended into July.

Today played out as projected.  If the up/down chop continues we should see some upside Monday.  May see some follow thru today's close and then reverse?

For the week as I indicated above we have 3 longer cycles topping which means they should have exhausted upside momentum.  We have two shorter cycles in play but one will be topping and one bottoming, so they offset. In summary - probably a sideways market the first 4 days and possibly fireworks Friday on employment #s.  Here is the week: 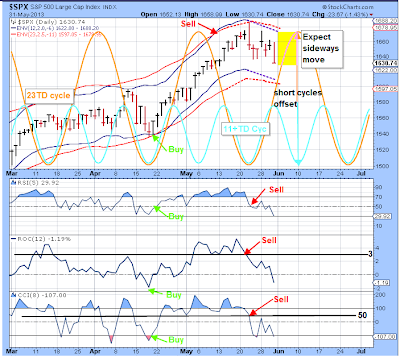 Are your stop losses in place? If not  - why not?

June 6: looks like a top was made....  Cycles now appear to be left translated (down legs longer than up legs).  Take a look:

Friday morning - June 7:  Up as projected (see chart above), may be topping:

Jim welcomes back noted technician Charles Nenner of the Charles Nenner Research Center. Charles sees many of his short-term cycles topping, with other cycles topping over the summer. He believes most of the gains are already in for the year, and feels that the average investor is too optimistic at this stage of the market. Charles sees strength in the US dollar until mid-2014. He sees higher interest rates coming, and is very cautious on bonds.

The market has probably seen the high for the year.  Short term correction coming. Above 1600, the market will be OK.   Still reasonable to buy dividend paying stocks (3-4% yield) and sell calls to increase income.

Get out of Bond Funds (higher interest rates = lower bond prices).   He is concerned too many are buying into dividend stocks, even though still considers them reasonable.  (I take this as be ready to unwind dividend positions?)  US dollar will strengthen towards the end of the year, and weaken in 2014.   Interest rates will rise and could rise significantly (EU concerns?).
Posted by Inlet at 10:28 AM No comments: