The 2 shorter cycles should offset (12 TD bottoming, 24 TD topping) by mid week  (Tue midday to Wed AM).  I would expect a pause in any down trend by mid week as the 12 TD cycle turns up.  As you will have the 90 TD, 45 TD and 22 TD cycles down I would expect any upside move to be limited in the second half of the week (if any upside at all).

A second way to look at this using the DPO (Detrended Price Oscillator).  Notice that the turning points above +25 and below -25 give good buy/sell points.  Combined with stops a few ticks near entry point for additional protection can give you a non-emotional way to trade....  See what I mean: 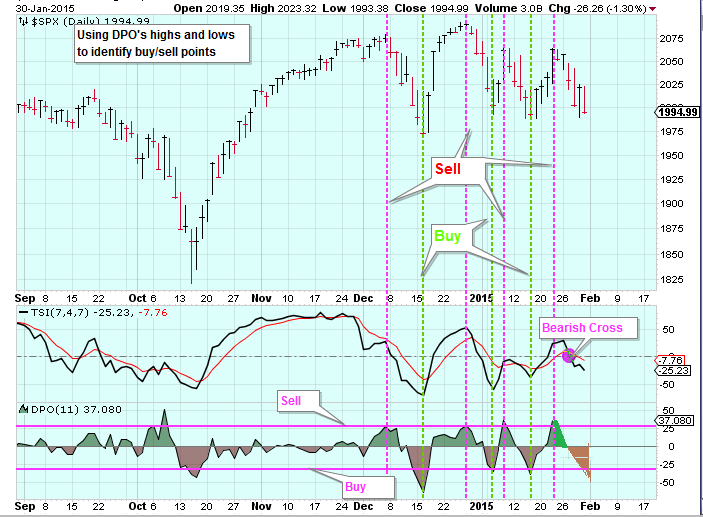 Two longer cycles (90 TDs and 45 TDs) are down.  Two shorter cycles (12 TDs and 23-24 TDs) are up into next week.  Expect top and turn down during the week with a bottom of short cycles by first Monday in February....  We may see new highs in SnP (close call?). 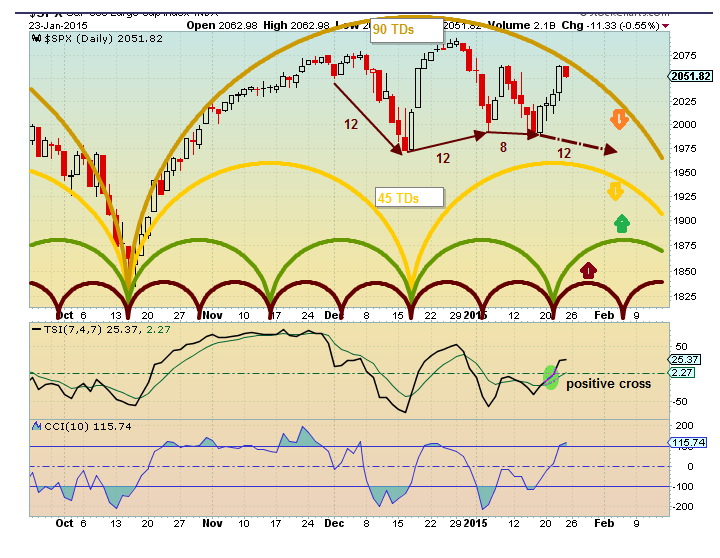 Charles Nenner Research (source)
Stocks should peak in mid-2013 and fall until about 2020. Similarly, bonds should peak in the summer of 2013 and fall thereafter for 20 years. He bases his conclusions entirely on cycle research. He expects the Dow to fall to around 5,000 by 2018 – 2020.
Kress Cycles (Clif Droke) (source)
The major 120 year cycle plus all minor cycles trend down into late 2014. The stock market should decline hard into late 2014.
Elliott Wave (Robert Prechter) (source)
He believes that the stock market has peaked and has entered a generational bear-market. He anticipates a crash low in the market around 2016 – 2017.
Market Energy Waves (source)
He sees a 36 year cycle in stock markets that is peaking in mid-2013 and will cycle down for 2013 – 2016. “… the controlling energy wave is scheduled to flip back to negative on July 19 of this year.” Equity markets should drop 25 – 50%.
Armstrong Economics (source)
His economic confidence model projects a peak in confidence in August 2013, a bottom in September 2014, and another peak in October 2015. The decline into January 2020 should be severe. He expects a world-wide crash and contraction in economies from 2015 – 2020.
Cycles per Charles Hugh Smith (source)
He discusses four long-term cycles that bottom in the 2010 – 2020 period. They are: Credit expansion/contraction cycle, Price inflation/wage cycle, Generational cycle, and Peak oil extraction cycle.

Only 4 trading days this week.  Expect a bottom by around mid-week of the 12 TD cycle and the 24TD cycle.... 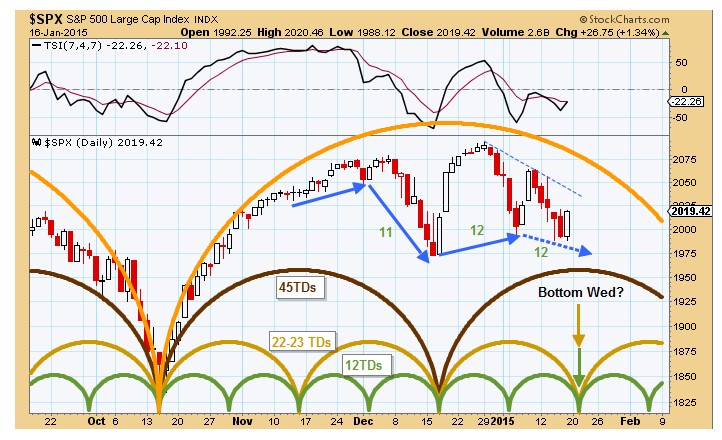 Looks like we may get a left translated top (less up days than down days ) for the 12-13 TD cycle.  So we may see a couple more up/sideway days followed by 7-8 down days....  Let's watch, because we will have multi cycles (shorter term cycles) down after mid week, and a left translated cycle would have us expecting an intermediate term down trend (multi weeks). 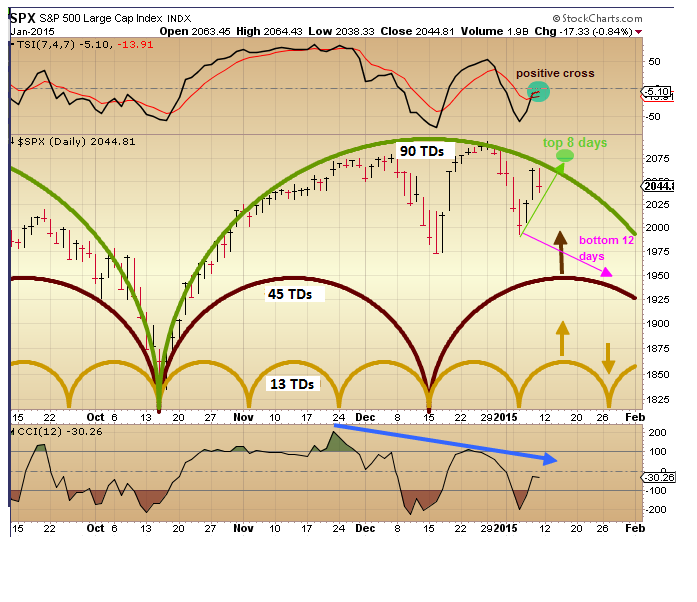 Email ThisBlogThis!Share to TwitterShare to FacebookShare to Pinterest
Labels: .

Appears the short 12-13 TDs cycle bottomed mid-day Jan 2 as the market closed with little change.  So the week of Jan 5 should be up and a top around Jan 12 for this shorter cycle and the next bottom around Jan 21.  The 23TD cycle  (some refer to as the lunar cycle - 28+ calendar days) should bottom also around Jan 21. 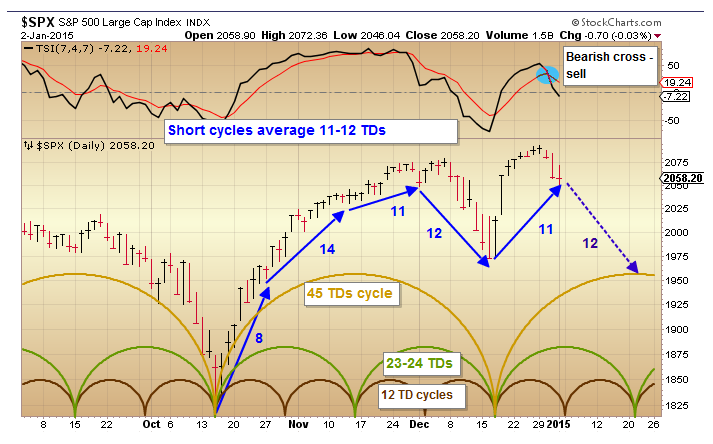